I have to confess that the subject of this project is not an idea of mine but is one that, to my recollection, I have seen only once.

When requiring to use parallels in the drilling vice most workshop owners will, myself included, make use of the same ones as used for milling, even though the requirements are very different. When used in the milling vice the parallels will most often be used to raise the workpiece to permit the top surface to be machined in some way, that is quite different to their use in the drilling vice where the purpose is to raise the workpiece so that through holes do not damage the vice below.

In the drilling vice therefore the height of the parallels is rarely critical but have to be positioned so that the drill does not make contact with them as it breaks through.

As holes in a workpiece are rarely very close to the edge then relatively thin parallels placed against the vice jaws will most often eliminate the problem, that is if you can keep them there. During setting up they will be prone to fall over making them difficult to work with and often move due to vibration whilst drilling is taking place. 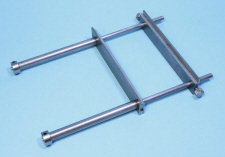 Various methods of keeping parallels against the jaws can be used but almost all have only a limited closing range. In my case, I use strips of soft rubber but this becomes inconvenient when more than a few strips are required to make up the distance, and  I am still using 6mm wide parallels which is often too wide when holes are close to the edge. Compression springs are another method but these are prone to buckle when the length is many times its diameter and so large diameter springs are necessary and even then a number of different lengths would be required.

The subject of this project, Photograph 1, surprisingly re-surfaced when my wife threw out some spring loaded skirt hangers and I decided to salvage the springs from them. Having to suit a range of sizes the compression springs in these are long and the turns well spaced making the range between free and fully compressed relatively large, being 65mm. These hangers are commonly supplied with the clothing purchased and the reader may be able to locate some of the same springs. Incidentally, each hanger contains the two springs required. However, any small diameter compression spring could be stretched to extend its range.