Before I go into detail regarding my existing workshop perhaps a little background detail regarding its development may not be out of place. I obtained my first lathe, a Drummond "Goliath", when I was in my very early teens but, not having the cash, or the know how, to equip it, it was never put to use. This was then followed at the age of 15 with the purchase of a Myford ML4 that fortunately had most of the essential accessories. However, now being at work and attending technical college three nights a week and with other activities demanding my time use of the lathe was minimal.

A workplace acquaintance at the time, whom I have not seen since, recently enquired to a friend regarding my health, etc. and stated that he remembered me making a micrometer which he told him it was very good , a situation that I do now recall. Obviously, cash was limited and a drilling machine to complement the lathe was also out of the question. At the time, a Watford company named Cowells supplied part machined castings for items of workshop equipment, a drilling machine being one. Not being able to afford these they agreed to supply a set of raw castings which I turned into a useful machine, Photograph 1, and  that was used for many years, though it has recently gone to a new home.

When I was 19 the ML4 was then replaced by a new ML7 but still attending technical college there was even less time for using it as the college work was becoming more demanding, eventually gaining an HNC in electrical control systems. At the age of 21 I was called up for national service and shortly after demob I got married, so with all the responsibilities this brought, furniture to make and a brand new large garden to establish, the lathe went into virtual moth balls until I was around 46 years old when I managed to purchase a milling machine. Unfortunately though, very soon after this a house move became necessary with yet another very difficult garden to layout so it was not until I was 52 that I eventually was able to start using the workshop in earnest. Being short of cash, once again, I was not in a position to purchase a milling cutter chuck for the mill so this became the first item I made, soon followed by steadies for the lathe and a few other simple items. Perhaps such a story explains why metalworking is predominantly an older person's pastime as at an earlier age the inclination was there but not the time or finance.

In 2009 the publishers of the “Model Engineer” and “Model Engineers' Workshop” decided to publish a special entitled “Readers' Workshops” and I was invited to contribute. The following is a slightly edited version of what was published. 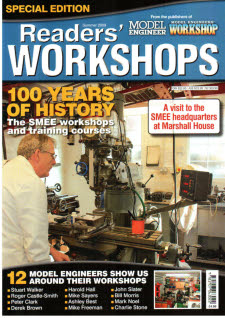