Having provided designs for low profile clamps for use on a milling machine table I eventually found a need for something similar when machining the top surface of a piece of cast iron whilst mounted on my lathe cross slide. This resulting in the need for smaller ones to those made for my milling machine were obviously too large.  After some considerable thought to the problem, being reluctant to make smaller versions of my original designs, I came up with what I consider to be a very simple answer to the problem.

Photograph 1 shows the task for which the idea came about. On the left side of the piece of cast iron is a length of steel with just two holes for clamping it to the cross slide whilst the similar looking piece on the right hand side has included in it four M4 grub screws for securing the workpiece.

The method is though not limited to situations where the clamp spans two tee slots and having made the parts, Photograph 2 shows that I found a use for them when being used in line with a tee slot.

When being used in this way though the centre distance of the slots and the width of the workpiece may not be compatible and some packing may be necessary as the Photograph shows. This though was an advantage as it prevented the end of the grub screw damaging the part being made. The rear jaw could of course be made wider and have slots, rather than round holes, to provide some adjustment.

To make it perfectly clear what the basis of the idea is, I have provided some dimension drawings which suit the Myford cross slide. However, many will need to use the idea on other machines but modifying the sizes to suit will be a simple task.

Whilst the Myford is made to Imperial dimensions I have, for consistency, used a metric dimension for the pitch of the fixing screws. However,the error will be  more than compensated for by the clearance provided by the fixing holes. I could of course have given a metric dimension of 39.69mm but this would have implied it to be a critical dimension. 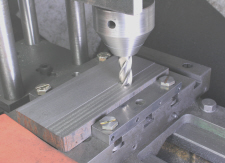 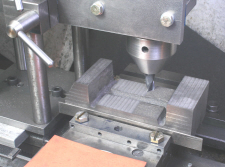