Having produced for the Model Engineers' Workshop magazine a series for the "Lathe Only" workshop, I commented. "Having now completed all the items for the series I am fully aware how versatile the lathe only format is. Having just a lathe is no bar to having an interesting hobby, or being able to undertake quite involved projects." However, whilst making the various items I became aware that even though a milling head would not greatly increase the lathe's capability it would make some operations appreciably easier by working with a horizontal rather than a vertical work table. As a result, I decided to equip the lathe with one to my own design, Photograph 1. This project is a result of my endeavours and will hopefully provide an interesting project for some and for others a realisation that owning just a lathe and a drilling machine is no bar from undertaking interesting projects.

I decided that it would be powered from the lathes spindle giving a range of speeds, rather than with a built in motor. Also, as it is intended to be used in a workshop without a milling machine any milling in its construction should be possible using the lathe itself. Actually, having completed the design, I found that no milling was necessary if one was prepared to finish the edges of the cut plates by filing.

With that decision made I could have started with a blank sheet on which to commence my design but was aware that I already had a milling/drilling spindle that would satisfy the requirements admirably (well almost), and just needed mounting. As this featured in my book Lathework a Complete Course there could be others who had made the spindle and would benefit from this approach.

My reservation above “well almost” was as a result of the limited cutter diameter it could accommodate, 6 mm or 1/4". The spindle was designed to take a drill chuck with a 1/2" x 20 TPI threaded mounting, and with drilling very much in mind this had a major impact on the design at the time. Now intending to use it largely for milling and on a fixed head, I felt that being able to hold cutters up to 12 mm was desirable.

The larger cutter would not perform as it would in the average mill/drill but larger surfaces could be covered when taking wide but shallow cuts for surfacing. Just how heavy a cut could be taken would only become apparent when the head was put to use. 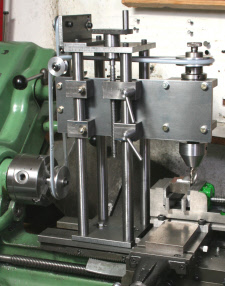 Do view my pages on making the stationary steam engine, “Tina”, which I made using this milling head to illustrate its versatility, see here.