Faced with the need to engrave a dial, typically for a lathe lead screw, then it is probable that three line lengths will be required. The longest for the tens, mid size for the fives and shortest for the units. Often the method will be to use the top slide with suitable cutting tool and control the lengths using the slides calibration. This can be a little tedious. Additionally, one must count the number of lines being made to decide when a tens length or a fives length line has to be made.

The lining tool, the subject of this project, largely overcomes the problem as it automatically sets the line lengths, also knowing which length of line to engrave at each location. Internally, it includes a 10 tooth ratchet that advances the cam's rotation by a tenth as each line is completed, the cam having been cut to set the line length at each position, Photograph 1 should make this clear.

If however, a dial is being engraved for a metric lead screw where 0.1mm will require the longest line and increments of 0.025mm the shortest lines. This would require the cam to index just four times in one revolution which would be difficult to achieve with the method being used. Therefore, the cam is made to suit, one long, three short, one long and three short for one revolution of it. This though is just  8 divisions and above a 10 tooth ratchet was mentioned as being fitted.

Photograph 2 shows the parts that make up the device from which it can be seen that there are two ratchets, one of which is 8 tooth. To fit this, the tool will need partially dismantling to change the ratchet, it is though a quick and simple task.

The photograph also shows that there is just one cam and that both the insets are the same depth, this being for the metric example above.  A cam having insets of differing depths would be required for the tens, fives, units dial, as required for an imperial lead screw.    Photograph 3 shows the tool being used. 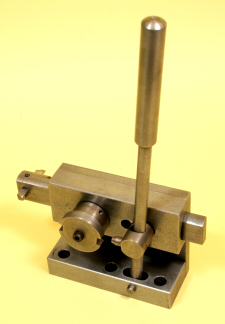 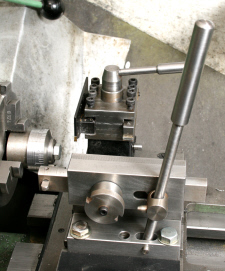 Design drawings for the Lining Tool and details for the method of manufacture are included in my book "Dividing" number 37 in the Workshop Practice Series. 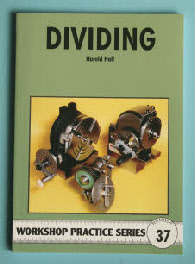