Having mounted and adjusted the lathe (both across and along the bed) using a basic spirit level a test piece can be turned and measured, from this, the direction of adjustment required can be determined. After adjustment, the test piece is again turned over its length and again measured. Further adjustments can then be made and the process repeated until a virtually error free parallel result is attained.

For the checks to be effective the test piece, mounted in the three of four jaw chuck, must be sufficiently long to ensure that any error can be detected and of a diameter that will not flex perceptibly whilst being machined. Twenty-five millimetre diameter and  around 100mm projecting from the chuck holding it will be about right. The 25mm will ensure that bending as a result of the cut being taken will be negligible.

It is inevitable that the bar will not be running true so one or two preliminary cuts of around 0.2mm using a freshly ground and honed HSS (high speed steel) tool, or a new tip in a replaceable tip tool,should be taken. When true, follow with a finishing cut of 0.05mm.

Having now turned the bar and taken the first set of measurements some adjustment will almost certainly be necessary. Typically, if the test piece is larger at the outer end, then the front mounting at the tailstock end, or the rear mounting at the headstock end, requires to be raised. If smaller, then the rear at the tailstock, or the front at the headstock, will need raising.

Even if the lathe is set up using a precision level, a test piece should still be turned and adjustments carried out. With repeated machining and checking, one should be aiming for a virtually error free result, ideally no more than 0.002mm on diameter over the 100mm length, certainly better than 0.005mm.

I must confess, that owning a Myford having jacking screws, the process is quite easy and the accuracy quoted above easily attainable. Using shims under the lathe's feet will be much more time consuming maybe resulting in accuracies less than above having to be accepted. In this case, the  between centres test bar, and the Cylindrical squares, detailed elsewhere on the site, maybe non starters. This does not mean that the lathe will be unable to do useful work as most tasks do not demand this level of accuracy.

You may question the machining of a part projecting so far from the chuck, without the outer end supported, typically by the tailstock centre, if so, one is correct to question such an operation. However, if the tailstock is not exactly on the lathe's axis this would effect the end result, and would be at odds with the test's purposes as most turning will eventually be shorter parts carried out without such support. The effect of the tailstock will though be discussed later.

The statements so far assumes the use of a 100mm chuck so that a test piece, around 130mm total length, can be held over a length of at least 20mm using the standard jaws, as in Photograph 2. 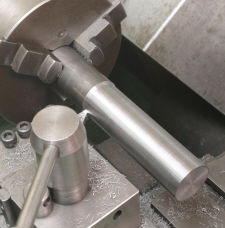