Next in the saga was a serious car accident and for something to do whilst off work I sent an article regarding the milling cutter chuck to the Model Engineer for their consideration. This was sent to Stan Bray who had just started the "Model Engineers' Workshop" magazine and articles on the other items I had made were requested, quite soon followed by my being offered the position of editor of the magazine and from where my article writing took off. What then is the situation with my present workshops? You will have noticed that I used the term "workshops" this being explained later.

Compared to many workshops in terms of machine tools I consider my workshop to be meagrely equipped. I did not know it at the time I provided the article but this was to be fully confirmed by the other workshop featured in the special. However, when it comes to accessories for them the situation is quite the reverse, for reasons given later.

The main machine is of course the lathe, first being the ML7 purchased when a teenager but eventually replaced by a second hand Super Seven Photograph 2 soon after becoming editor of the "Model Engineers' Workshop" magazine and this signalled the beginning of a major upgrade to my workshop's facilities. One such upgrade was to the lathe itself being the addition of a screw cutting gear box and whilst I do not do a great deal of screw cutting I hated setting up changewheels so not being absolutely essential this is one of my workshop luxuries.

Whilst my Cowells drilling machine had served my well it was not really man enough for much of what I found myself undertaking and so a much larger floor standing machine was purchased, Photograph 3, added to this later is the compound table seen mounted onto the machine's table, Photograph 4. Do not be fooled though into thinking that this enables milling to be carried out on the drilling machine, it does not. Four things make this impractical, 1. the drill chuck is inadequate for holding milling cutters, 2. the chuck is not held in place with a draw bar (very dangerous) 3. there is no fine down feed and 4. the down feed cannot be locked in place. Otherwise it would be practical as the table itself is robust enough. 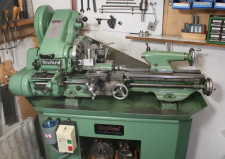