The more usual form of rotary table comprises a round table rotated via a worm and wormwheel, for many though, making this type would be too involved. This being  a situation  that the table described here seeks to overcome. Photograph 1

In simple terms, the worm/wormwheel drive is omitted and the table rotated directly using an extended handle. The main disadvantage of this is that control of the table position is much less precise. To overcome this, I have included two features that are not found on a conventional table, at least in the smaller sizes.

2. Twenty Four holes are drilled around the edge of the table to achieve

Another feature I think is possibly unique is the workpiece locator and securing screw. This making it easy to locate a part centrally onto the rotary table. Photograph 2 shows the feature being used to position a link having its ends radiused. For a simple operation such as this I have found it to be more suited to the task compared to using a conventional rotary table.

The post, bottom right of the link, is primarily there to enable the link to be positioned identically for machining the second end so that the stops did not need resetting

The feature provides for M3, M4, M5 and M6 securing screws with only a simple bush needing to be made to provide for differing hole sizes in the part being machined.

I was very pleased with the end result with it performing better than I could have hoped and can see me using it in preference to my more usual tables for many applications. Even the part seen in Photograph 3 was made quite easily. This being the part seen bottom left of the table in photograph 1 and which mates with the outer diameter of the table.

The inbuilt workpiece locator is a very definite plus!

The full details are  on the Projects in Metal website, placed there to fulfil a promise I made to the site’s  owner. You may also like to look here. 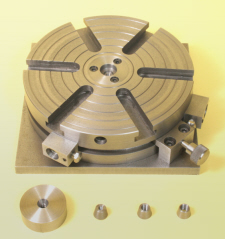 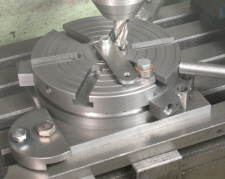