Another advantage of using the machined jaws to hold a workpiece is that the part should, when added to the jaws, run perfectly true or at least to a high degree of precision. This though will be dependent of two factors, firstly, the jaws should be bored to precisely the diameter of the part to be machined so that the chuck will close to the same position as when bored. Secondly, the chuck must be in good condition with the scroll a close fit in its housing.

Machining the jaws is a simple operation but it is not just a case of winding the jaws to a suitable position and boring to requirement. The reason for this being the backlash between the scroll and the jaws teeth will permit the jaws to move as they are being machined. To avoid this situation the chuck must be tightened onto a suitable size plug, Photograph 1. I say suitable, but the size of the plug is not crucial, even so it plays a vital part in extending the jaws life.

Considering the requirement to hold the 25mm diameter disk, 3mm thick previously mentioned. If a plug 10mm diameter were used the jaw would be machined to a width of 7.5mm. If however, a 20mm diameter plug was  used only 2.5mm would require machining away. Reducing the amount removed would extend the life of the jaws delaying the day when a new set would be required. With regard to depth, machining the jaws 1.5mm deep would be sufficient providing the workpiece had square edges otherwise 2mm or 2.5mm should be considered. Again the shallower recess will extend the jaws life.

As was mentioned earlier a major feature of using soft jaws is that the wrap around that they provide enables parts to be held securely using less clamping force. Consider the need to machine a piece of very thin walled tubing. In this case, attempting to hold the tube with a recess as was done when holding the disk above will be a non starter and the tube will require gripping between the jaw ends as with conventional jaws. The jaws will therefore require machining to their full depth and equal to the tube's diameter. Obviously in this case, it will not be possible to grip a plug between the jaws as this will prevent the required machining to be carried out.

To achieve the desired result it will be necessary to produce a disk with an outer diameter just sufficient to ensure that it is strong enough for the task. Using a plug between the jaws, machine a recess to take the disk as above. The diameter of the plug used when machining the jaws to take the disk, should be about 1mm less than that of the tube to be held. Too small, and you will end up machining away more of your valuable jaws than you would like. 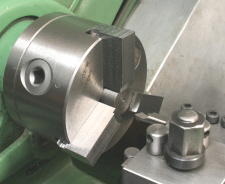