Probably the main reason why soft jaws for a three jaw chuck are rarely seen being used in magazine articles is that they do not come as standard with the chuck as purchased, or with those supplied with a new lathe. At this time, limited understanding of their use, and or a desire to keep costs down invariably results in the chuck being obtained without this useful accessory. Also, suppliers do not list soft jaws for many of the chucks they supply and in many cases those on offer are for the more costly ones, as a result, being another deterrent from purchasing them for some.

When a task arises that would benefit by their use, in their absence other methods are found resulting in an ongoing delay in them being obtained. Eventually, especially after some considerable time, there will be some concern that the jaws being offered in the catalogue will in fact fit the aged chuck possessed. Making ones own, whilst not impossible, is a time consuming project but if you like a challenge, or have an aged chuck of unknown make, then I have given my method of producing these in another page on the site.

The lesson from the above is to purchase the jaws when purchasing the chuck, an approach that most (myself included) will not have taken.

What then is the purpose for a set soft jaws? Well, their uses are many and varied but in a nutshell they are to hold parts that would be difficult, or even impossible, in the chuck as purchased.

A frequent use is to hold parts that are thin compared to their diameter, typically, a disk 25mm diameter by 3mm thick. If the disks being considered had to be bored to produce a ring, say only 5mm less than its outer diameter, then the ring would tend to collapse as the bore increased in size. This being due to the ring being unable to withstand the pressure from the three point contact of the jaws, how then can this situation be avoided? If the chuck is fitted with soft jaws and shallow bored to grip the outer diameter then the jaws would wrap around the component giving a better grip and at a reduced clamping force, Sk. 1a. Of course, at larger diameters the improvement would be reduced as the degree of wrap around lessens, see Sk. 1b. This situation can though be overcome by adding auxiliary jaws to the standard soft jaws, a subject that will be discussed later in the article. 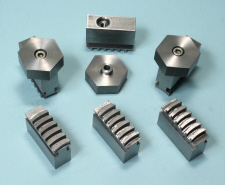