I have used the term “High profile clamp” for this device as it was born out of the low profile clamps that I had made and that were placed in the T slot of the milling machine table. These consisted of five forms of clamp with four being of two piece construction, that is a fixed portion and a moving jaw  but the fifth was just a single piece of steel, Photograph 1. At the time, I thought that the height of this one could easily be increased for holding more substantial workpieces.

For the original the working face was just 14.5 mm wide being governed by the width of the tee slot in which it was to be used,. However, when I eventually came to consider the idea I came to the conclusion that making it wider, whilst still using the same clamping method, would result in a more useful clamp. For that reason it could no longer be just a single piece of steel and the device is now held in position by using a separate tee nut having two, rather than one, fixing screws. The reason for using a two screw fixing is that the method will be capable of a considerable clamping force that will be attempting to move the clamp along the worktable. With that in mind it is worth taking note of the fact that the device uses two 1mm pitch clamping screws. This compares to a single screw of 3 or 4mm pitch with the average vice so that a secure hold will be achieved with much less torque being applied.

Whilst a single fixed jaw with a single clamping jaw will find many uses in the workshop making two pairs will greatly enhance the capability of the system with Photograph 2 showing two sets of clamps being used to secure a length of steel whilst a pair of slots are being made in it. The advantage of the system in this case was that the workpiece was far longer than the vices available would handle and quicker and easier than setting it up using conventional workpiece clamps.

The drawings show the clamps as I made them, with two exceptions which I will discuss later, but the reader may have to amend the dimensions to suit the milling machine on which they are to be used. Even if the dimensions given suit the tee slots on the machine on which they are to be used, do check that two sets can be mounted in adjacent slots, if not, then modify the width to permit this, see photograph 2 which illustrates this requirement. Of course, you may choose to make only a single pair of clamps should you consider this will satisfy your requirements. 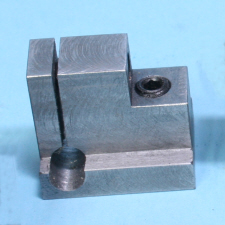