Special Quadrant for a Myford

Having myself fitted a gearbox to my Myford series seven I subsequently found that it was not possible to set up complex pitches without purchasing a special quadrant as the original that I had removed would not fit. Similarly, those who purchase a lathe with the gearbox already fitted will also need to acquire the special quadrant.

Having a need to make a worm gear it was a case of  purchase a quadrant, or make one, I chose to make one which is the subject of this project. I did of course have all the change wheels but viewers who acquire a lathe complete with gearbox will also require to purchase gears, though only those needed for the applications as they arise rather than the complete set. The finished quadrant can be seen in Photograph 1.

The photograph shows that I have not fully shaped it as detailed on the drawings. This was with the object of saving time. Those who wish to save even more time could leave the main arm at 60mm wide throughout its whole length, though I have not fully checked to see if this would cause any problem with it fouling any part of the lathe. Even so,I am sure the shaping detailed could be reduced  further than I have done.

The quadrant is held in position mainly by a stud on  in the curved slot, the clamp on the boss on the end of the gearbox requiring only the lightest grip. Myford's quadrant has a split end, rather than the method I have adopted, and Myford warn against over tightening as it can cause the bearing to tighten.

Manufacture of the quadrant is a simple process so I will not go into lengthy detail. Initial thought would lead one to bore the 46mm  hole whilst the part is mounted on the lathe's faceplate. However, it is too long for the Myford lathe so unless a larger lathe is available the method is a non starter.

In this situation there would appear to be just two alternatives. If a milling machine is available, equipped with a boring head, then using the setup as in Photograph 2. would be ideal. Note how holes have been drilled for the ends of the slot, to be eventually made, and are being used for securing the part to the machine table, supported on parallels. However, if the bore is started from a relatively small hole the task will be rather time consuming. In this case, chain drilling a circle of holes to remove the bulk of the material, as I did, is worth considering. 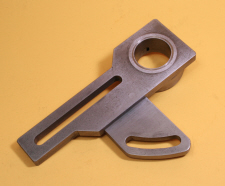 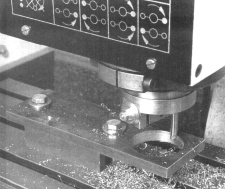