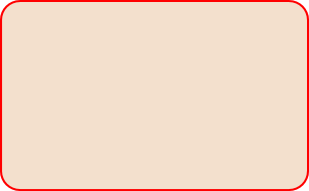 I would have liked to have said “machine your soft jaws to hold the parts for machining” but suspect that most workshop owners will not have this very useful item, as was the case for me for many years, but eventually regretted it. Do therefore consider making them a part of your workshop equipment. Photographs 21 and 22 show them being used for boring and tapping part 6 for the horizontal engine I am also making.

The Cylinder Covers present a problem in that there are five holes required on a PCD (pitch circle diameter) not being an easy division to establish, compared say to six. If the reader has already a method of dividing using the lathe's mandrel then it will not be a problem. On the basis that most will not I will suggest a method that will be easy yet sufficiently accurate.

Take a sheet of the self adhesive paper, as used for making large labels when using a computer printer, and cut a strip 1/2” wide. Wrap this tightly around the circumference of the chucks back plate and with a sharp knife cut through both pieces where they overlap. You now have a length of paper that is exactly equal to the circumference of the back plate and that needs dividing into 5 equal parts. Unfortunately, its length is very unlikely to be one that makes this easy, the solution is though simple.

Take a piece of lined paper and place the strip of paper onto this at an angle such that it just spans the number of lines for the number of divisions required and mark the strip at each line. However, with only five divisions being required it will be better to span say 20 lines and mark it off at every fourth line. With that done, remove the strip's backing and place it around the backplate first having cleaned it well to ensure it adheres adequately. By some means, make and fit a pointer to use as a reference, I used a piece of self adhesive thin metal strip as seen in a later photograph.

Reface the fixture in the chuck to remove any traces of the double adhesive and mount a guided punch onto the top slide packed up to centre height and locate it into the drilled centre in the base of the bore. Pull the punch back to remove it from the drilled centre and wind it out by 9/16” (half the PCD) using the cross slide. Align one of the lines on the paper strip with the pointer, top left of Photograph 23 and tap the end of the punch to make an impression, repeat for the other four and part off at nominally 5/32” thick, Photograph 24. If, like me, you are using a small chuck requiring the reverse jaws to be used the part should be supported using the tailstock centre, see photograph.

If you do not have a guided centre punch it is a simple item to make. Just turn a point on a piece of 5mm diameter silver steel and harden the point. The support is a piece of square material drilled 5mm allowing the punch to slide freely . See Sk.1 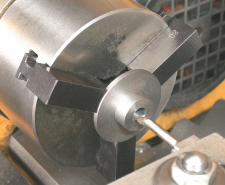 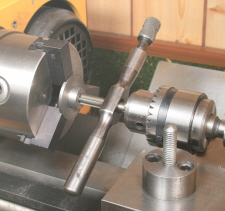 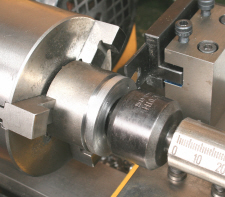